The progression of gendered identities into Norway law in 9 minutes 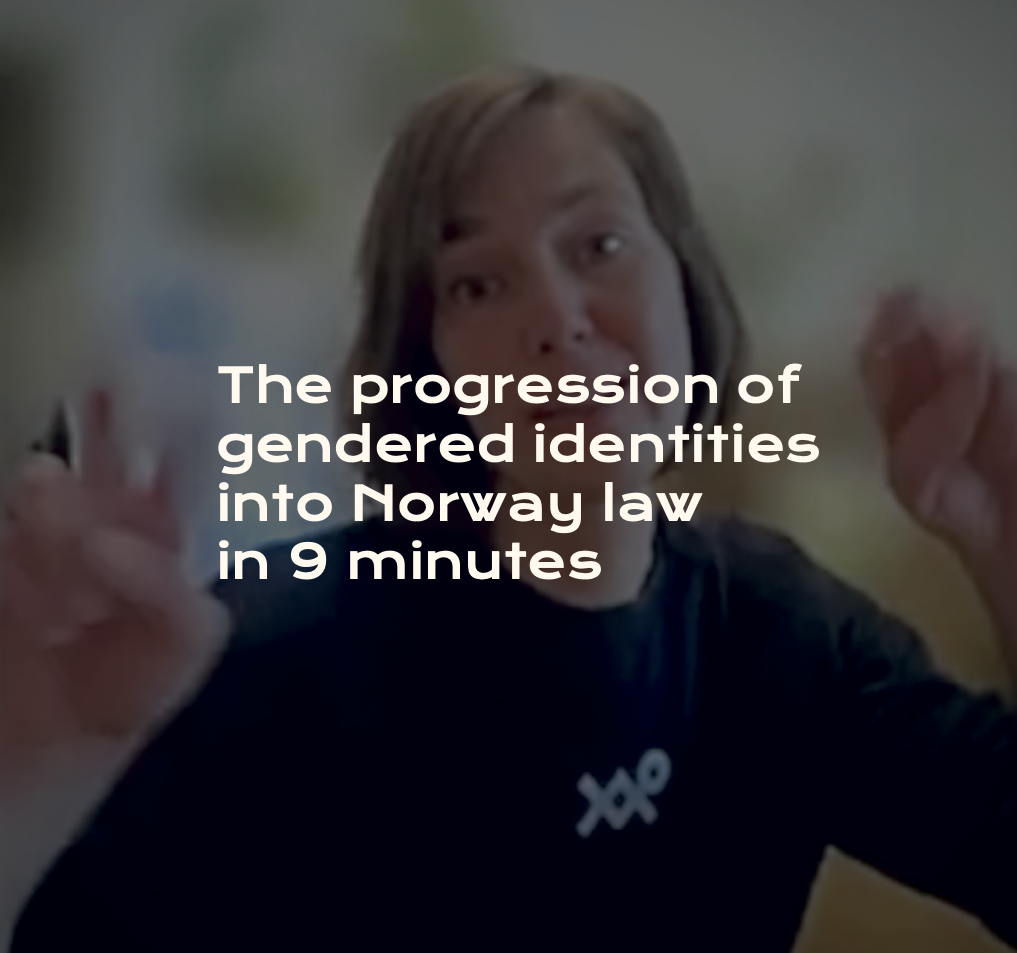 Norway removed transvestic fetishism from the fetish-classification in 2009. This brought out a wave of men claiming to be women, and this new vocabulary of “transpersons” with “gender identities” started to flood mainstream media and politicians.

In 2013 the concept of “gender identity” was included in Norwegian discrimination laws. This decision was made without any assessments to how it would impact women and girls.

Then i 2016 Norway implemented a law that made it technically impossible to differentiate between biological sex and the concept “gendered identity”. The purpose of the law was to remove the criteria of having a diagnosis in order to change legal sex. The campaign was waged using the techniques described in the now notorious Dentons-manual – by attaching the proposal to a more popular reform to give it a protective veil, avoiding media attention and by targeting youth politicians to have them present the necessary arguments to the different political parties, in order to give the impression that the proposal came from within the party rather than from the external political lobby organisations the proposal in actuality came from. And of course, by outright lying whenever necessary – the narrative that was spun was that changing legal sex could only be permitted on the condition that the applicant had undergone so called sex-reassignment surgeries, and that demanding that “transpeople” had to be sterilized in order to “be recognised for who they are” was a human rights violation. But so called “sex reassignment” was never a condition to change sex in Norway. The condition was to have a medical diagnosis.

The campaign succeeded and in Norway anyone can change their legal sex regardless of age, and change legal sex without a diagnosis from the age of 6 years old. Children between the age of 6-16 can change legal sex with only one consenting parent, but may also have their self-declaration of sex accepted without any consenting parents. It is also not necessary for married couples to inform their spouse of a change in legal sex.

There is no system in place for tracking the number of people who change their legal sex, it is technically impossible to check if a person has changed legal sex based on new identification number, and it is impossible to confirm whether the variable “sex” is referring to sex or the concept “gendered identity”.

This law was also passed without any assessments on the impact it could have on women’s rights. The year following the implementation of self-id, the number of women reported for rape more than tripled, but the change in the definition of the variable “sex” the previous year was never addressed, and it is technically impossible to actually verify the sex of these women.

Then in 2020 the concept of gendered identity was proposed to be included in Norwegian criminal law, in particular in Norwegian hate crime laws. By now, I had been made aware of trans activism, the intensely misogynist and homophobic nature of both their demands and their tactics and the growing movement of women voicing their protests the demands that the erasure of women’s sex-based rights needs to stop.

I went to the hearing for this law on behalf of the women’s declaration Norway, and told them that if this law was passed, it was guaranteed that women would be reported for hate crimes simply for having an objective understanding of biological sex, because biological sex has been declared hateful.

The law nonetheless came into effect in 2021. And I was informed by the police in may that I was under police investigation, suspected for hate speech. The alleged hate speech includes every single interaction I had had since with an employee at the leading LGBTQ-lobby organisation in Norway since the law came into effect – a man who claims to be a lesbian mother, and whose job it is to be an advisor on gender and sexuality. He also included a tv-debate and a hearing to the police report.

I am still waiting to hear from the police what they are going to do, and whether or not I will be charged with a crime for stating the fact that men cannot be lesbian mothers. Which is especially ironic considering that if this man was what he claims to be, a woman who is a lesbian mother, he would not have protection in the law enacted against me – as women as a sex-class are excluded from this law. However, if he is what I say he is – a man claiming to be a woman – he would have protection in the law, but then, if course, I would be right in what I am saying and it would either be criminal to speak the truth – or they have to drop the case.